This is the original Nyxathid Goes To Town tournament report, as published on the Good Games community website.

In October 2009 I took my pet Legacy deck to a tournament at Good Games Sydney. It was a sweet little rogue creation of mine- a hybrid of Pox and Suicide Black- and featured Nyxathids. It had posted good results before, and this time I was going to write a tournament report about it smashing everyone. I entered the tournament on a high- I was gonna rock the world!

But unfortunately I got my ass handed to me. With my ego sliced up like a teenage babysitter in a cheap horror film, there was no chance I was going to write a report about it now! I threw away all my notes from the games and slumped down in a funk.

But something kept scratching at the corner of my brain as I lay in bed that night. Fact is I wanted to write a report about my Nyxathid deck, and to hell with the results.

And then it came to me- I wouldn’t do a mopey, drivel-filled report; but rather a comic depicting my matchups, and hide my embarrassing defeat in humour. And hell, it’d give my Photoshop skills a workout.

It’s been over a year since I started, and I can remember little more about the tournament than the original match-ups and the results. But I’ve finally had the time to finish it off.

So ladies and gentlemen, brace yourself for…

This tournament report is rated MA. It contains childish themes. 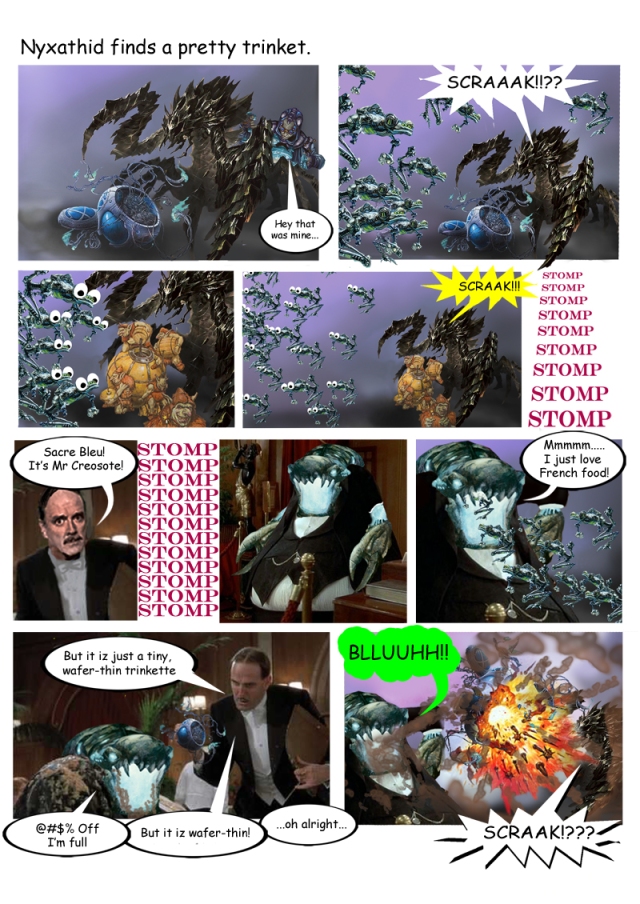 And so Nyxathid went back home to his deck box, thoroughly bruised and beaten. But at least not hungry after all those Baneslayers.

This comic would not have been possible without Magic’s incredible range of artists, the following of whose works were appropriated:

All these artworks have their original copyright held by Wizards of the Coast, and have been used, edited and manipulated for non-profit, entertainment purposes only.

Only one Nyxathid was harmed in the making of this tournament report. But don’t worry, he’ll get better soon.

4 Responses to The Original Nyxathid